So it’s Christmastime at home and that can only mean one thing. That darn annoying Elf is back.
I still don’t know what I was thinking a couple years ago when what I thought was a cute idea turned into my living nightmare.

For those of you not familiar. The thing is to have this shelf, a boy or girl, make its appearance at home the day after Thanksgiving. It’s a way to bring the spirit of Christmas to the house when you have little ones. This elf’s purpose is to visit daily and then is gone day after Christmas. The idea is to prop the elf somewhere in the house so the kid or kids find him the following morning. The deal is that every single night the darn elf has to be moved to a new place to keel the magic alive. Problem is that the kids expect creativity and pressure mounds. Sometimes it brings little presents others he shows mischief.

We’ve been able to manipulate V to behave as Eli is always watching and reporting back to Santa. Victoria names her elf Eli. No idea why. So there’s the back story on the elf and the current vain of my existence. It’s not fun. It’s a burden and I want it gone.

Would I traumatize V if one morning I have the fireplace on and leave remnants of her clothing by the logs so I can say she burned while going to the North Pole the night prior? Hmmmm...it’s crossed my mind. It tell her a coyote ate her? Hmmmm.....

Until I find the courage, I will keep playing along. Silver longing is how much fun V has with the whole Eli thing. Last night Eli brought some blank letters for V to write letters to Santa. Why? Because on day one when Eli made her appearance for the year, Eli noticed (Dad did) that V right away took pen to paper to write Santa a letter asking for -shocker- Hatchimals! 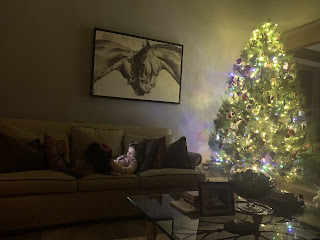 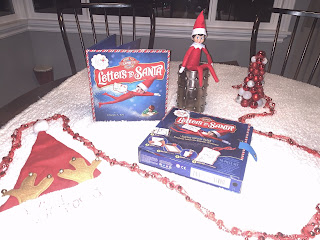 Posted by PigLoveSeven at 6:34 PM