My daughter has some peculiar fads. She gets into stuff and really obsessed over it. A while back I took her to the Hollywood premiere of Ralph Breaks The Internet. Out of the blue, she wants to see it all the time now. She saw it on the plane back from New York a couple week’s back.

This morning I was woken to her beautiful voice calling papi papi papi. It wasn’t a good morning that she was anxiously calling attention for. She wanted the Netflix password for her iPad to watch, you guessed it, that very movie.

After I obliged she quickly left as she hurriedly said Good Morning. Later in the morning as we had breakfast, she wanted help because Alexa was playing the wrong song. She kept requesting Alexa play Jasmin song by Disney. Since Dads always make things happen, she was blown away when I told Alexa to play A Whole New World. She was about to trigger a tantrum for me playing the wrong song when she smiled realizing it was what she wanted. “How did you do that Papi?” Magic love, it’s all magic!

And magical it is spending time with this angel. 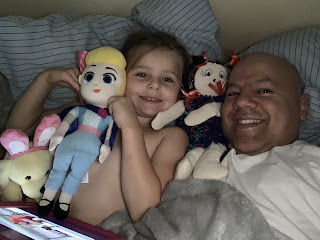 Posted by PigLoveSeven at 8:59 PM