I grew up with Mom and Grandma taking me to the cemetery to visit my Big Sister.

Over time I grew up imagining how she would be at my age. I would question over and over why she would be taken away at such a young age. Six months is unimaginable.

She fell ill with a fever and just like that, she passed en route to the hospital. Meningitis was the medical reason.

I reflect now as a Father and cannot even begin to comprehend the hell on earth my parents lived during that time.

Like with most hurtful experiences, I’ve learned to archive them deep down and lock them up and throw the key away. But as I revisit that specific memory, it just hits home given my newest role in life. Mom has been a strong woman ever since I can remember. Life has thrown her some really crappy curve balls but has always scathed chin up. But how can you have the strength to assimilate the loss of a child? That was only to prepare her to lose another child just wanted years later.

Miroslava to me became symbolic of so many things in my life. That little memorial with her name on it spoke love to me from whenever I remember reason. When my Abuelita would talk about her, her eyes would have an unforgiving sparkle that would transcend physics. Grandpa, Mom, anyone that knew her would speak with such tenderness and love.

As I reminisce about that part of my life, I can’t help to think of long ago memories I had purposely chosen to erase. While I never met her, she was a part of my life growing up. Strangely enough, because my nuclear family kept her memory alive. Ironically, I chose to bury that memory because I was unwilling to let go. It was too hurtful.

I’ve chosen to bring that memory back because as a Dad I now realize so many things that were never in my radar. Miroslava like Victoria in my life now, was the beacon of love that brought so much joy to a family that yearned and wished for her with all their hearts.

In a huge influence, the sentimental and emotional part of me was shaped by Miroslava being the sister I never met but knew all about growing up.

At times now, when I see into my daughter’s eyes, I wonder if some of that sparkle is not  Miroslava’s love coming through. 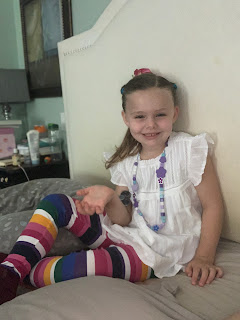 Posted by PigLoveSeven at 8:56 PM