A Visit with Dad in Texas

Mommy spent the day at Legoland as a present for Victoria’s last week before starting Kindergarten. The little nugget in the oven I’m sure enjoyed the outing as well taking in the sounds.

I visited Dimmitt, Texas today. The place Dad called his first home when he came to this country in 1946 at the age of 14.

I’m emotionally spent. As such. I’m sharing the reflection of today’s experience.

SEVEN miles left and my goosebumps awaken to the dawn of a new day in the horizon.

Dimmitt, Texas was Dad’s first home when he came to this country at only 14 years old in 1946. A very small agricultural farming town of not even three thousand people in the panhandle of the Great State of Texas.

It’s been 73 years. A lifetime ago. Dad died shortly after promising to live to take my bride’s hand for his last dance at our 2007 wedding. Dad was a man of impecable integrity. He kept his word.

Today, I felt his presence. It’s weird how that works. Inexplicably, his spirit was there as if waiting for me. It was in the fields, the clouds, the vegetation, the barnhouse, in the rain, in the space of that place he so loved and feared alike.

As I drove down Highway 385 - the road he must have driven a million times, walked the streets he walked, I could only imagine the fears, hopes, aspirations, and how afraid that kid must have been in these arid yet so fertile desolate farm fields.

I felt how scared he was at the face of acting strong for his family. I sensed the loneliness he lived which he so many times shared with us. But I also felt the giddiness and excitement of starting a new life to help his just-widowed Mom and numerous siblings have a better life without hesitating the personal sacrifices and hardship that lay ahead in those fields.

Having his Dad die and being the oldest, he had to step up and help raise the big family, there was no other option. The usual debauchery of teens his age was simply not in the cards for him in this lifetime. There was a higher purpose to fulfill.

Consequently the imbalance reared vices that would close his circle of life prematurely much before his time should have been up.

Those chilly cotton and wheat fields now quenched with the sweat he labored over 20 years still hold Dad’s dreams. They hold on tightly to his primary wish of being a provider to those he left behind.

The sadness I felt walking Dad’s path was overcome with an epiphany of what the winds in Dimmitt were whispering.

Maturity, or as I prefer to call emotional vulnerability, has taught me to not only listen but to share. To not drown out the voice, the pain. So I listened intently.

Maybe that’s why the sky started crying too upon my arrival. The rain came down as I pulled into town. The mist to raindrops turned to downpour but not before making way to the uniquely Texas big blue sky opening its curtains to that beautiful breath-taking sepia glow. To me, that was Dad saying “hasta que veniste cabrón!”

The silent voices in the wind were elated, twirling, and dancing because I had in a strange sorta way...come home - even though I had never been there. But destiny has a funny way in recognizing what resides deep inside our soul. Yep, they knew Dad had come home to visit. It’s as if the fields were happy to see me. Happy to see that the realization of those dreams they held for so long were actually there to connect with the materialized manifestation of that aspiration once left there so long ago.

The dreams did come true, well at least the most important ones did. The others were buried deep within the soil’s effervescent richness waiting for future seasons to bloom for others walking Dad’s shoes. A piece of me, a piece of Dad had come home to visit. To say thank you.

To connect with the son of that kid long gone.

It was a strangely but yet comforting religious experience. A legacy so rich cemented in one geographic space.

As I smiled through the rear view mirror leaving that now sleepy town, the song “Nunca Te Olvidaré” hummed in my mind. The same song Father Jim played at Dad’s funeral. “Three thousand years may go by, but I’ll never forget you...”

Thank you for the infinite sacrifices you made in your live’s journey to provide the foundation for my success.

Today I connected with Maco’s spirit, that energy that is everlasting and perpetual. I commiserated with that 14 year old that was oblivious to the fruits of his labor. He reaped what he sowed.

...And that kid smiled back! 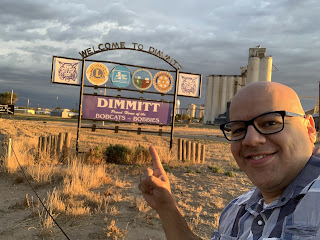 Posted by PigLoveSeven at 6:03 PM