Thank the good Papa Dios as Dad would say.

The bun in the oven has been cooked 30% thus far.

Just to imagine that our baby in just a couple weeks has gone from a ball of jumbled cells to now an active fetus who is moving and kicking around, opening his mouth, yawning, swallowing and with the case of the occasional hiccups is nothing short than miraculous. So much so that studies have shown that the baby is now reacting to the outside world. He can squirm and move at the touch of mommy's belly.

Today in the pregnancy world is a huge huge huge day. Did I say how happy and blessed we are to reach today?

Today marks the official end of the first trimester of our pregnancy.

We are 12 weeks pregnant today and so many things are to be thankful for. First and foremost, it marks the period where we can let the cat of out the bag. It's my life's longest ever kept secret. This is so and highly advised by doctors because of the high risk of miscarriage in the first trimester.

The little one is out of the red zone of danger for not sticking around. After today, the odds are less than one percent that to happen. So that is why they highly recommend people wait until after today.

So 12 weeks mean we are officially three months pregnant. Sounds so surreal. It also means the baby is considered the size of a plum.

Things today just got real. Especially as three clear signs reminded us that this is really happening:

1. The ever elusive Baby Bump is showing it's face. Thanks Fundus!
2. The overnight appearance of the Linea Nigra.
3. The wife's official case of Ptyalism.

Ok, let's write in English as to what these three telltale signs actually mean:

1. The wife's uterus has grown out of its nestled pubic bone to outside into her abdomen. It seems as if her body was quite busy last night because none of these things had been visible to us until today. The "fundus" which rhythms with not so nice words, is the ability of one to be able to feel and touch the top of the uterus when touching the belly. This is the first sign of the famous baby bump. So yes, today we saw and felt the fundus.

2. This is a dark vertical line that appears from the public bone to the belly. I am blown away with this fact. I have never in my life heard of such a thing. The streak is about a centimeter wide and looks as if I took a sharpie to her stomach. Very strange. This happens because of the melanocyte-stimulating hormone being produced by her placenta. This same hormone also causes (I know TMI but it's a part of the miracle of life) the nipples to develop an unusual dark color. Of all the advances in medicine, it is still considered one of nature's phenomenons. Other interesting accelerators in mommy's body are the fast growth of skin tags and spidery veins, stretch marks, and lotsa pimples.

3. Ptyalism is the medical term for excessive salivation. Experts also seem to be perplexed to the cause of this during pregnancy as to this date no real medical explanation exists. So they blame it on the raging pregnancy hormones. It is ironic the wife is going through this because it's associated with severe cases of morning sickness of which she has had absolutely NONE. So another testament to the fact that every woman and every pregnancy is different. Thank you excessive saliva for giving us physical evidence that things are progressing nicely.


WIFE BODY CHANGES
Mommy at this stage is highly recommended to put lotions on with a high concentration of Vitamin E and take plenty of Vitamin C to keep the veins healthy. While the end of the first trimester also marks the end of the nausea period, she is now entering the time of indigestion and constipation. Yikes!

The fatigue, mood swings, and crazy bathroom rushes will soon fade but be replaced with increased intensity of headaches and dizzy spells.

The positive is that this next phase of the pregnancy will also be filled heightened great mood and energy levels as the instinctual nesting kicks into high gear.

However, the good news is that the second trimester is also known as the happy time for a pregnancy. That "glow" everyone talks about happens during this period. She will radiate beyond her already natural beauty and exude an air of glamour and stun.

Let's take a look at how the baby looks right now in this 3 month milestone: 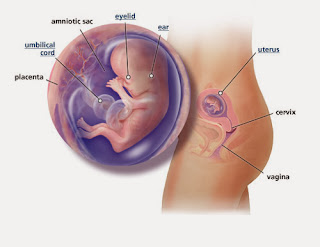 Pretty amazing to see how much the baby has grown. His eyes and ears are now in place. And he is moving every limb, sucking, swallowing and squirming around. If you look at the second diagram, you will see the term "mucus plug" pointing to the opening of the cervix. This is where the baby will enter the world. HOLY MACKEREL! How can a woman's body open up like that and close right up. Again, stuff that one takes for granted. Pretty crazy in my book, but it's a part of the magic of birth.

So after all this, it is safe to say that all baby systems are good for ignition and take off. He is fully formed and developed. Now it's just time for him to grow, grow, grow.....and for the good Lord to continue bestowing his blessings on his development.

Speaking of, a shout out to all you prayer warriors whom we have so shamelessly recruited to help send us the positive vibes and energy so much needed in our journey for a healthy, happy baby. Thank You!

Needless to say, we were on a high today. We celebrated with bean and cheese burritos. I guess the wife will find out the hard way about the indigestion issue she involuntarily just signed up for.