Love is...ending a day filled with hanging out with your mom and wife talking about how much I cried as a baby, her tips and tricks to how she dealt with me being the worse infant and baby ever. Today was one of the precious moments made of memories that reflected on mother's own. While I knew I was born at 7am (there is the seven creeping up again), I didn't know so many details of me as a baby.

Interestingly, life takes on a very different meaning when you are now expecting one of your own. I learned that I was not a pleasant newborn. I know, shocking. How could I not. I rock. But I wasn't. Mom's labor was unending. She had a natural home birth but boy did I make it painful for her.

It was a team of three to raise me. My grandmother, my grandfather, and mom. They all took turns as I refused to sleep in my crib and would not allow them to sleep whatsoever. I was fussy, crampy, crabby, and just hated having been ejected from the womb all around.

My sensitivity started young. I learned I was overprotected. I did not see the light of day for the first 90 days of my life. My parent's firstborn passed away at six months only when mom was three months pregnant with you. So my development was a tough one. Emotionally, I took in all of the grief and despair of mom having lost her firstborn Miroslava. Overprotected because of their fear of losing me.

I had an "aha" moment today. It explained so much. No wonder I am as I turned out. Many things made sense now. A baby in the womb is impressionable to all things the mom is living, experiencing, feeling, and eating. That environment inevitably shapes the very fabric of who we are.

In my mom's own words sharing this with my wife, I not only heard her words, but felt her love. Her eyes would gleam with such pride. That exchange between the woman that gave me life and the woman I love was impressionable and I captured and stole that moment and recorded deep inside me. One experienced mother talking to a woman who would soon become one. My own circle of life.

Love is, recounting and clarifying certain facts while mom laid patiently in my home office coach at times watching me write my blog and at times dozing off to your usual loud lullaby snoring raucous. It transported me to yesteryear when I would be studying late and writing papers while in grade school or high school and she would always find a way to be by my side and occasionally waking from her slumber asking if I had finished, or if I was hungry.

That is my routine, I settle into my home office every evening to reflect on the day's activity of this journey and write about it. But today was no ordinary day. Mom had assumed her position, and did what she knew best. Kept me company and in between snores, would wake preoccupied to either ask if I was finished, or if I was hungry. As her job was not finished until I would usher us out and called it a night.

We don't partake in the craziness that is the holiday shopping madness. Today was an exception. We had to go on the hunt for the infamous Snoogle, or maternity body pillow. Apparently there will be a lot of births in 2014 as they were sold out everywhere.

We finally found one at 11pm far far from our home. We went to secure one and is now safely home. After Siete inspected and provided his sniff stamp of approval, it is now ready for a test drive tonight. 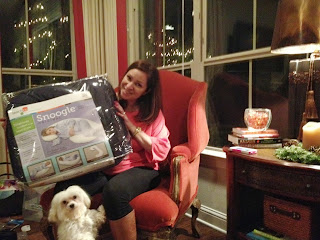