Seems like Dallas is in recovery mode after the ice storm that paralyzed the city since Thursday night. That is four full days!

Wife had first day back at work today after that city-imposed mini-vacation. In contrast to my time in Chicago this week where with the wind chill factor temperatures have been as low as -15 degrees! It snowed today. It was a toasty 1 degree this morning and ended this evening at 16 degrees.

Despite the chilling temperatures in Chicago, they know how to deal with Mother Nature. The roads are clear and safe. They have this weather business in Chicago down to a science. As opposed to Dallas. If one snowflake falls. The entire city comes to a standstill and people raid the grocery stores clean as if Armageddon was in place.

Like clockwork, wife felt "uneasiness" and "weird stomach feelings" down in her belly last night. The uneasiness was Baby G letting his - or her- presence known. My bet is that since the baby can now hear, he was telling mom enough with Oprah and her OWN channel. Wife binges on Oprah programming when hubby is away on business trips. I'm glad I finally have someone to "kick" some sense into her. Get it, "beat?" Ok, I will exit stage left.

While mommy-to-be has already been told by several people that she is glowing (without them knowing she is pregnant), now is officially the stage where she is in full glow mode. This is apparently the time in a pregnancy that women give an air about them. I think it's because of the hormones that are wreaking havoc with their bodies in preparation for childbirth and for nurturing the baby. 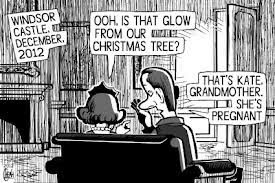 Even though I am not pregnant, I think I glow too. Definitely not physically, but it's all sunshine radiating from the inside. Early on I shared that one sees things through a different lens. Ordinary things take on a completely different meaning and observance. I am witnessing that. I think it's to the highest expression and fulfillment of hope realized. Pretty amazing feeling.

God is Good. And that glow is good enough for me.

Posted by PigLoveSeven at 6:03 PM