It is also day two of not being able to leave the house. Literally. We are forced into house arrest and seclusion. All roads are closed and are literally ice rinks. I left the house to walk to a neighbors house and fell three times. There is no traction on the floors at all. So I am beginning to worry. If this ice does not melt soon, I have a business trip that needs to happen.

As a result, there is mayhem and crisis at the house. Since we can't drive because of the ice on the roads, we have a shortage of strawberries in the house. All out. Strawberries for a very strange reason are craving #1 in wife's pregnancy. She must eat about three pounds a day. No joke. Hopefully the baby won't have strawberry hair or a strawberry nose as a result. She even depleted her frozen batch. I told her beets were better (as I still have tons waiting to be snuck into a Vitamix smoothie), but she wouldn't bite the bait.

Little does the baby know that madness that is happening around where he lives with Icemageddon Day 3. He is too preoccupied inhaling and exhaling his amniotic fluid which is helping him practice breathing.

He is also as I mentioned yesterday, starting to develop his hearing. So awesomely cool! I will soon have to start blasting my music so we can start the musical taste training!

Here is the baby at 14 weeks courtesy of BabyCenter: 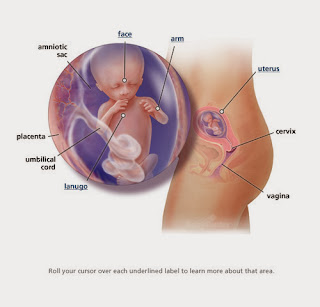 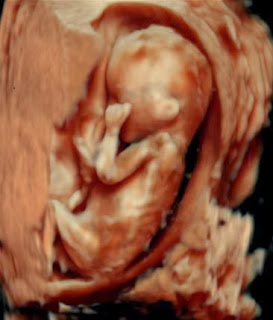 This is all just sheer miraculousness!

The wife is still convinced that it will be a girl and has already decided on a girl name. Someone help me now please...

If it's a Girl:
source: The Pregnancy Countdown Book by Susan Magee

From the moment you learn of your partner's pregnancy, you're thrust into a strange new world and encouraged to participate in the pregnancy and birth process. Yet, you may feel awkward about sharing your fears and insecurities. That's only natural. Here are seven common fears faced by fathers-to-be:

The biggest fear men face is the one most deeply hardwired into our culture: Will I be able to protect and provide for my family? In many families when the first child arrives, there's this sudden if temporary shift from two incomes for two people to one income for three. And that's a tough burden to carry in today's world. The father has to be strong in ways he hadn't counted on before. He has to provide support not just financially but also emotionally: His partner will need his help, she'll be undergoing dramatic emotional shifts, and he has to be ready for her to lean on him.

More than 80 percent of the fathers I come across in my practice say they were worried they wouldn't be able to perform when their partner was in labor. They were afraid of passing out, throwing up, or getting queasy in the presence of all those bodily fluids. Such fears may be based on cartoons and sitcoms and our culture's way of making fun of men, but two things became clear: The men all expected it — and it almost never happens. In follow-up interviews, it turned out only one out of 600 men fainted, and that was in August in Fresno (California), and the air conditioning had gone out and two of the nurses had to leave the room, too.

If you really can't tolerate blood, step out of the delivery room. Don't ignore your fears — work through them, talk to other fathers who've been there. Typically, the first thing fathers say when they come out of the delivery room is "The baby and my wife are fine; it's a girl." And the second thing they say is "I didn't get queasy — I came through it okay."

About half the new and expectant dads I interviewed eventually came around to admitting they had fleeting thoughts that they weren't really the baby's father. But if you ask them whether they suspect that their partner had an affair, they're insulted and hurt. On a logical level, it's a disconnect, but on an emotional level something else is going on. He's dwelling on his own inadequacies: "It's too monumental, too godlike, being part of the creation of life. Someone bigger than me must have done it."

When you're a part of the beginning of a life, you can't avoid thinking about the end of life. Thoughts about your own mortality can loom large: You're not the youngest generation anymore, your replacement has arrived, and if everything works out right, you'll die before your child dies. For a lot of young men who go around thinking they're immortal or invincible, that's a big change. One of my clients was a world-class racecar driver, and he gave it up. He told me, "I don't have the right to die anymore."

5. Fear for your partner's or child's health

Childbirth is such a nerve-racking experience. Scary things can happen to the person you love most in the whole world. You might lose the baby; you might lose your partner and have to bring the baby up alone. It really wasn't long ago that giving birth was fraught with danger: When my grandparents had children in the early 1920s, the main cause of death in women under 50 was childbirth. Today, if the birth goes well and the baby's fine, you'll still find most parents secretly counting the newborn's fingers and toes.

Men often fear that their partner will love the baby more than anyone on earth — and exclude them from that intimate relationship. It's a very real fear of being replaced.
It's true that having a baby can put a real strain on your relationship with your partner. It's also true that dads can feel left out of the powerful mom-baby bond, especially in the newborn weeks. But each parent brings different strengths to the partnership. The child usually relies on the mother for security, comfort, and warmth. The child looks to the father for his sense of freedom and separation and sense of the world. Of course, those qualities can come from either parent, but when all these strengths work hand in hand, it's fabulous.

My advice to dads is to make it clear that this is his child, too, and he's a partner in raising him. He needs to spend time alone with his baby and kick Mom out of the house some days.

Men are not used to the ob-gyn establishment. It's foreign, it's cold, it's something we don't understand well. Even as observers, many men feel embarrassed and inhibited around stirrups and gynecological exams. Hospital examining rooms and delivery rooms are not made comfortable for a father. Being prepared — making decisions together about the kind of care you want for your partner and baby — helps tremendously. Having a birth plan, with a set role for you, also helps to make clear what's ahead in the process.


Jerrold Lee Shapiro, a licensed clinical psychologist, is the author of Becoming a Father(Springer), The Measure of a Man (Berkley), and When Men Are Pregnant (Delta). He lives in the San Francisco Bay Area with his wife and two children.

Posted by PigLoveSeven at 7:59 PM