After a whirlwind week of travel, it's finally nice to be home taking care of the future Mommy.

The baby in the pregnancy medical circles is considered the size of a plum now and is 25% into his development. His length is between 1.25 and 1.68 inches and weighs 5 grams.

What is unbelievable is that at only 10 weeks now he has taste and tooth buds now.

And this is the mind-blowing part. Right now, at this age, he is growing a quarter of a million new neurons every minute in his brain. How is this 1. possible, and 2. even counted. Science is nuts.

And get this. His sex organs will be visible already next week. If he indeed is a boy though, his testes are already producing testosterone.

Here is an actual photo at 10 weeks courtesy of IamPregnant. 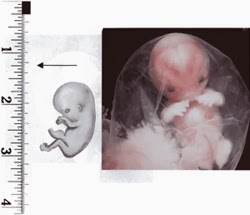 The math gets really complicated during pregnancy. It takes me back to my statistics and calculus classes at USC. They never really made sense. Or I missed the allocation of those neurons when they were distributed. But even though we are 10 weeks pregnant, the age of the fetus is only 8 weeks.

While the baby's major systems are in place and developed (now they just need to grow grow grow), the wife's emotional changes are at an all-time high during this period given the surge in hormones.

How often are you given permission and told you need to gain weight? This is the time to be gaining weight slowly for the health of the baby.

For now, I am kicking off the weekend with my dearly beloved. The Vitamix awaits another debate in begging her to drink the veggies and nuts and other goodies she despises.

Posted by PigLoveSeven at 5:54 PM