8w4d: Slow Motion with a Dose of Wedding Tears

The raspberries are pumping their little hearts out. Today was their first official movement - even though yet to be felt by Mommy. They are now beginning to move their elbows. Wow!

Friday can't get here fast enough to be able to peak at them through the window of ultrasound.

1. dry and stuff nose
2. zero desire to do anything around the house (extremely rare)
3. lotsa crying
4. fatigue and drowsiness

As a pregnant husband, I share in the last symptom. Very unlike me, but I have fallen prey to some of the wife's patterns of coping with her pregnancy - which includes evening naps and being in bed by 8pm and waking all night! Very unlike me. I always sleep like a rock and never feel fatigued. I have a natural high where I am usually full of energy and nonstop till pretty late at night.

I do have to share that I've caught the wife crying on several occasions. Today was one of them. I walk into the bedroom thinking she was taking a nap to her totally balling as she was watching a Facebook viral video about a bride dancing with her brothers at her wedding in lieu of her Father since he had passed. Mind you, touching storyline, but it's out of character for the wife to mope around tearing away. Touching. I guess I should be more empathetic as my reaction was "WHAT!!!!!!!" She proceeded to show me the video expecting the same outpouring of emotion. She was disappointed in the lack of spell in moving me. Nice but, eh. I told her, now you dancing with my ailing Dad, THAT was epic and sentimental.

You see, Dad was in hospice during the time of our wedding. He had promised me that the last thing he would do in life was to dance with my wife. He was so happy for us. So happy that I had finally found the love of my life. We gave him A for effort as the doctors did not think he would make it. Well, he hung in there. We took a special couch to our wedding and set him up with all the comforts during the reception. After the wife did the Father Daughter dance. She went over to my Dad where he was glowing just watching his son's most lifetime special day happen before him nestled in his frail bony body on the corner of the couch. She went to him, reached out her hand, and wife simply said to him: "bailamos?" Which meant, "shall we dance." She proceeded to slowly and gently lift him up, and with kitty gloves escort him to the dance floor.

The song she danced with Dad was completely irrelevant. All I remember is that my own life flashed before my eyes at the tender moment of my love holding  onto and dancing with the man whom had given me life and unconditional life for 35 years. It is a visual which shall remain imprinted in my heart forever. No words were spoken between the two as they danced. Their souls were doing the talking. There was love and gratitude in their eyes. For that moment was what life and love were all about. A clash of emotions. My throat would no longer be able to withstand that heavy load it felt at the moment and a dose of good-hearted tears flowed through the sides of my eyes. 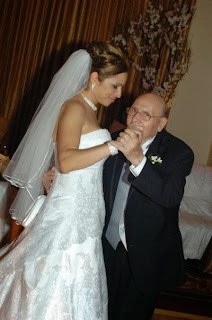 Low and behold, Dad has fulfilled his promise. Right there and then. That part of our wedding will be completely unforgettable to me. I later went over to have a moment with Dad on the couch after his dance with my wife. Again, we spoke no words as I held his hand tightly as he further squeezed it. He glared into my eyes with his tired but still gleaming green eyes. They told me so many things. But his biggest message was that of being proud of me. I still hold that vivid image deep inside me. Dad has fulfilled his promise. He soonafter passed away. Wow, how I miss Dad. What I wouldn't give for him to be living this moment of our lives with us. He would have been the best Grandpa to these little tikes. He would of made sure we dressed them as he did me. With boots, hats, and all things vaquero or western wear.

I replay all of these memories in slow motion in my head whenever I need to go to a place of serenity and comfort. While it may seem sad, they are not, they are indelible memories that are the essence of love and the celebration of life. By remembering one keeps those we love alive. When Dad was in his last moments, I would ask him what he most wanted upon his entry to heaven. He told me such a profound statement that I engraved it in his grave. "Remember me, because if you do, I will never die." Sounds a bit off now that I read it in English. But the original Spanish version is much more profound.

So I guess a pregnant dad does experience some of the same symptoms of the wife. For I live with the first, must suck it up and step it up on the second, lost on the third tonight, and continue coping with the fourth.

All I pray for is that I will one day be half the father he was to me.


Posted by PigLoveSeven at 8:21 PM