228 more days to go. Today's Sunday reminded me of LA. Absolutely beautiful weather. Decided to treat the wife to one of her favorite Sunday brunch past-times: Dim Sum! It was pretty scrumptious as always. However, since she can no longer have spicy condiments, her experience was not the same. So I don't think we will be coming back for a while.

Last night she had some pretty vivid dreams too. This is noteworthy since she is not much of a vivid dreamer. In her dream, she knew she was pregnant and was in a place which practiced reflexology. She was preoccupied if the session would affect her pregnancy and left once she didn't get the assurance. Pretty interesting how our current state has filtered into our psyche.

100 ounces of water. That is the magic intake she needs to be drinking a day in order for her babies to keep growing healthy. So, off I went on a water buying binge to ensure she had water available at every nook in the house. Everywhere she turns she has it accessible. No excuses. I think she is absolutely sick of it. But all for rooting for Team Baby A and Team Baby B.

We continue sending Team Baby B lotsa positive energy for that growth to continue and that heartbeat to get stronger.

Their development continues with some very important and key milestones. The baby's "tails" which are now starting to disappear. This is the area that will become the four lower fused bones of the lower part of the spine. It's unimaginable how quickly they are developing in these last couple days. Just yesterday, the lower lip and jaw finished forming. The eyes are still wide apart and the upper lip is not yet completely formed along with the ears which are still below the jaw line at this point.

The brain of the babies is simply formed already but is going through some serious transformation. The brain is still hollow but it's already attached to the spinal cord. The brain is starting to now fold into five sections. The lowest part or the hindbrain (called pons, medulla, cerebellum) will form first and they control the baby's basic functions which we all do unconsciously like our balance and breathing. The midbrain is above the hindbrain and this area controls emotions, and sensory perceptions, including the two hemispheres of the brain. Given all of this brain activity, fish is considered the best source of protein for the wife to take in. It's gotta be fish that doesn't contain mercury though. But fish really is considered brain food. Especially for this stage in the child's development.

Fish on the Menu this week: Shrimp, Salmon, Pollock, Catfish, and even canned light Tuna is good.

Wife also had a headache today. A first in many weeks. So lotsa rest and a nap or two.

In the meantime....someone, please help! 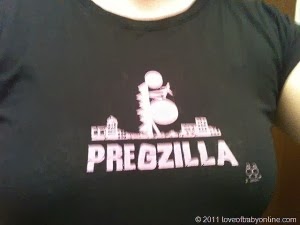 Posted by PigLoveSeven at 5:01 PM